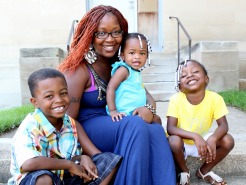 Beginning in 2009, the Bill & Melinda Gates Foundation supported a pilot program to prevent homelessness for survivors of domestic violence and their families. Here's what they learned.

The Bill & Melinda Gates Foundation has made ending family homelessness in Washington a focus of their state efforts starting with the launch of the Sound Families Initiative in 2000. The Foundation has helped fund thousands of new housing units for families experiencing homelessness and is investing in approaches that are aligned with the strategies identified by USICH’s Family Connection resource, including coordinated entry and rapid housing.

In 2009, with the financial backing of the Gates Foundation, the Washington State Coalition Against Domestic Violence (WSCADV) launched a five year pilot program testing the success of a survivor-centered, Housing First approach to preventing homelessness for survivors of domestic violence and their families. The pilot worked with 13 existing programs in 13 urban, rural and tribal areas across the state and the findings demonstrate positive outcomes across all sites.

The results of the pilot, released last week at a symposium held at the Gates Foundation headquarters in Seattle, are impressive. Of pilot participants, 96% remain stably housed after 18 months. Fully 84% of survivors reported an increase in safety for themselves and their children. And the cost to the participating programs of serving the survivors and their families, once housed, also went down - 76% of survivors received only minimal services from the domestic violence programs at minimal costs to the agency.

When asked about the success of the pilot, participating programs repeatedly cited the flexible spending and organizational change brought about by the survivor-driven approach. The ability to offer survivors the things they needed to be safely and stably housed, rather than telling a survivor what was available to them or that they couldn’t meet those needs due to lack of funding, space or the inflexibility of dollars tied to specific funding streams, was powerful. Often the total amount spent on a participant using the flexible funds was less than would have otherwise been spent using traditional funding with standard restrictions. One advocate cited an instance where a survivor had obtained a new job and spent her own funds for a new apartment and security deposits, but was told on her first day of work she needed to purchase steel-toed boots at a cost of $100 in order to keep the job. Just $100 of the pilot program funds allowed for the purchase of the boots, supporting her ability to maintain employment – critical to her ability to maintain stable housing.  Another advocate echoed that the ability to buy new tires for a survivor, whose abuser had slashed hers, was a small expenditure that allowed the survivor to attend legal hearings required to maintain her housing and meet the obligations of other program services. Without the flexibility to cover these minor but impactful expenditures, advocates are often challenged with having to identify new housing options for the survivor – a much more difficult and costly endeavor than a pair of boots or new set of tires.

While few homeless service providers are lucky enough to have a Bill Gates in their backyard, the pilot highlights that the power of flexible philanthropic dollars, even in small amounts, is real and worth pursuing. Philanthropic dollars and public-private collaboration should be an essential part of any community response. Furthermore, many successful aspects of the Washington DVHF pilot are replicable without additional funding, and not limited to the sub-population of families who have experienced or are fleeing domestic violence. WSCADEV has published a toolkit with helpful guidance on implementing a client-driven advocacy approach and tailoring services, including examples of temporary, practical financial assistance, housing search and retention techniques such as community and landlord engagement, and more.

Building on the positive outcomes of this pilot, WSCADV will launch an expanded, five-year regional demonstration and research project with support from the Gates Foundation and others. More research is expected in coming years. To date, the DVHF pilot is a great example of how collaboration across government, community-based providers and the private sector is essential in the response to family homelessness. In order to prevent and end family homelessness, including homelessness among the families experiencing domestic violence, it will take all of us, but we know it’s possible.

Kiley Gosselin is a Management and Program Analyst at USICH, where she helps coordinate federal policy efforts to prevent and end family and youth homelessness.

This blog originally appeared on the USICH blog.