On July 23, the US Department of Housing and Urban Development officially proposed a rule that would rewrite the Equal Access Rule as it stand and erase protections for LGBTQ people facing becoming unhoused or in need of any HUD-funded services. This proposed rule change would remove critical equal access protections that ensure equal access for everyone in need of HUD-funded services and programs, but particularly targets transgender, gender nonconforming and nonbinary individuals. HUD exists to “build inclusive and sustainable communities free from discrimination,” however the proposed rule would open the door to taxpayer-funded discrimination against the people in our communities who are at the greatest risk of violence and inequities. The Equal Access Rule’s protections against discrimination are critical to ensure safe access to shelter for transgender, non-binary, or gender nonconforming people experiencing homelessness, survivors of violence, and people fleeing disasters.

Currently, homeless shelters are expressly directed to accept transgender, gender nonconforming and nonbinary people, but the proposed changes would instead allow shelters to reject members of these communities simply because of who they are. This proposed roll-back would allow widespread discrimination towards transgender, gender nonconforming, and non-binary people when they are facing becoming unhoused, or fleeing from disaster. The current regulations provide safety in HUD-funded programs, and this proposed rule change would only leave transgender and non-binary people less safe and more at risk, especially during a global health crisis.

Funders Together created a joint statement alongside our advocacy partners denouncing the rule, which you can read here.

How Philanthropy Can Take Action

This proposed rule comment period opened Friday, July 24, and will run through September 22, which is the deadline to submit comments on this proposed rule change. HUD is legally required to write a response to each unique comment before they can implement a Final Rule, meaning that the more comments they receive, the longer it will take them to put this dangerous and discriminatory rule into effect.

Funders Together is working closely with our partners on a campaign to generate as many public comments in opposition of the rule as possible in order to slow down the process in which this proposed rule could become approved. Philanthropy can take action and join in with other leaders to oppose this proposed rule and protect LGBTQ and trans people from shelter and housing discrimination by:

Remember: Submitting comments to proposed regulatory changes is NOT considered lobbying. Private foundations can provide comments in response to this proposed rule, and public charities, like community foundations, can do so without tracking and reporting it as lobbying on their 990s.

If you have any questions about this proposed rule or submitting public comments, please email Amanda Andere or Lauren Bennett.

National Alliance to End Homelessness Webinar: A Conversation About the Equal Access Rule and Why It Matters
Wednesday, September 16 | 2pm ET, 11am PT

On August 19, Funders Together to End Homelessness and Funders for LGBTQ Issues hosted a call for funders focused on the proposed changes to the Equal Access Rule, how it would affect the LGBTQ and trans communities, and how funders can act to oppose it.

Funders Together to End Homelessness joins other national housing advocates to support Black people and Black organizers who are working on housing justice.

Here is the timeline of events from our partners at the National Health Care for the Homeless Council's Mobilizer Advocacy Alert:

January 2017-Present: President Trump leads an administration focused on policy changes that create and perpetuate homelessness, to include requesting massive funding cuts to anti-poverty programs, eliminating the U.S. Interagency Council on Homelessness, adding work requirements to Medicaid and food stamps, and expanding penalties for immigrants who use social benefit programs (just to name a few).

July 2019: In an interview with Tucker Carlson, President Trump commented on the homelessness crisis, expressing extreme concern (particularly at the visibility of homelessness). He largely blames liberals and sanctuary cities for the homelessness “phenomena that started two years ago.”

Late September 2019: The White House Council of Economic Advisors released a report: The State of Homelessness in America. The report misrepresents evidence and asserts that homelessness is caused by overregulation of housing markets, the “tolerability” and availability of shelters, and “individual characteristics” like mental illness and poverty.

November 2019: The Administration requested Matthew Doherty to stepped down as Executive Director of the U.S. Interagency Council on Homelessness (USICH). During this, speculation started to circulate of an upcoming Executive Order from the Administration pointed towards using some sort of federal intervention to address homelessness targeted at California but having impact nationally.

December 2019: The Administration hired Robert Marbut as the new Executive Director of USICH. Marbut had a long history of convincing local governments that the solution to homelessness lies in large-scale shelters rather than in housing-based approaches causing concern for many in the homelessness sector.

Early January 2020: A letter from HUD Sec. Ben Carson to Los Angele Mayor Eric Garcetti circulated, confirming fears of the Administration’s attempt to strike a deal with the city to address the homelessness crisis. In it, it ties certain policy changes such as “empowering and utilizing law enforcement” and use of “federal land” for shelters to the federal funding the Administration would provide.

Mid-January 2020: Sources reveal that the Administration is backing away from an Executive Order in pursuit of targeting cities with a large unsheltered homelessness population and attempting to reach a “strings attached” deal with each in efforts to claim a political “win” in those communities and states.

February 2020: President Trump releases his proposed FY21 budget which include cuts to HUD by $8.6 billion or 15% below 2020 enacted levels. The proposal would eliminate vital housing programs, including the national Housing Trust Fund and all funding for public housing capital repairs. It would also eliminate the HOME Investments Partnership program and Community Development Block Grants (CDBG), significantly decreasing much needed resources for affordable housing, community development, and solutions to homelessness.

March 2020: On March 4, 2020, Secretary Ben Carson testified before the House of Representatives Subcommittee on Transportation, Housing and Urban Development and Related Agencies (THUD) of the Committee on Appropriations In his testimony, he admitted he is actively trying to find ways around language built into FY20 budget that requires HUD to adhere to the FY18 NOFA. This caused the THUD Appropriations Committee to pay special attention to language that could allow for criminalization of homelessness in budget bills that go beyond FY20.

Funders Together to End Homelessness is working with our Board of Directors, national partners, and close advisers around the philanthropic response and possible long-term strategies.We are also working to provide resources, talking points, media opportunities, member and partners statements, and other related content for funders which will be compiled on this resource page. We encourage you to check back often or reach out to Funders Together if you would like assistance in crafting messaging for a statement of your own.

If your organization has a resource or statement you would like listed here, please contact Lauren Bennett. 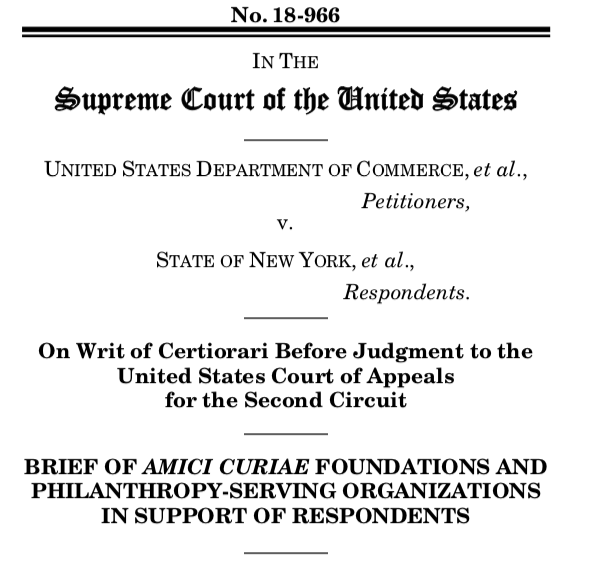 The 2020 Census is less than a year away, but the work to ensure a fair and accurate count for our communities is far from over. Funders Together to End Homelessness, along with nearly thirty other philanthropy serving organizations (PSOs) and funders, contributed to an amicus curiae brief to contest the proposed citizenship question on the 2020 Census. 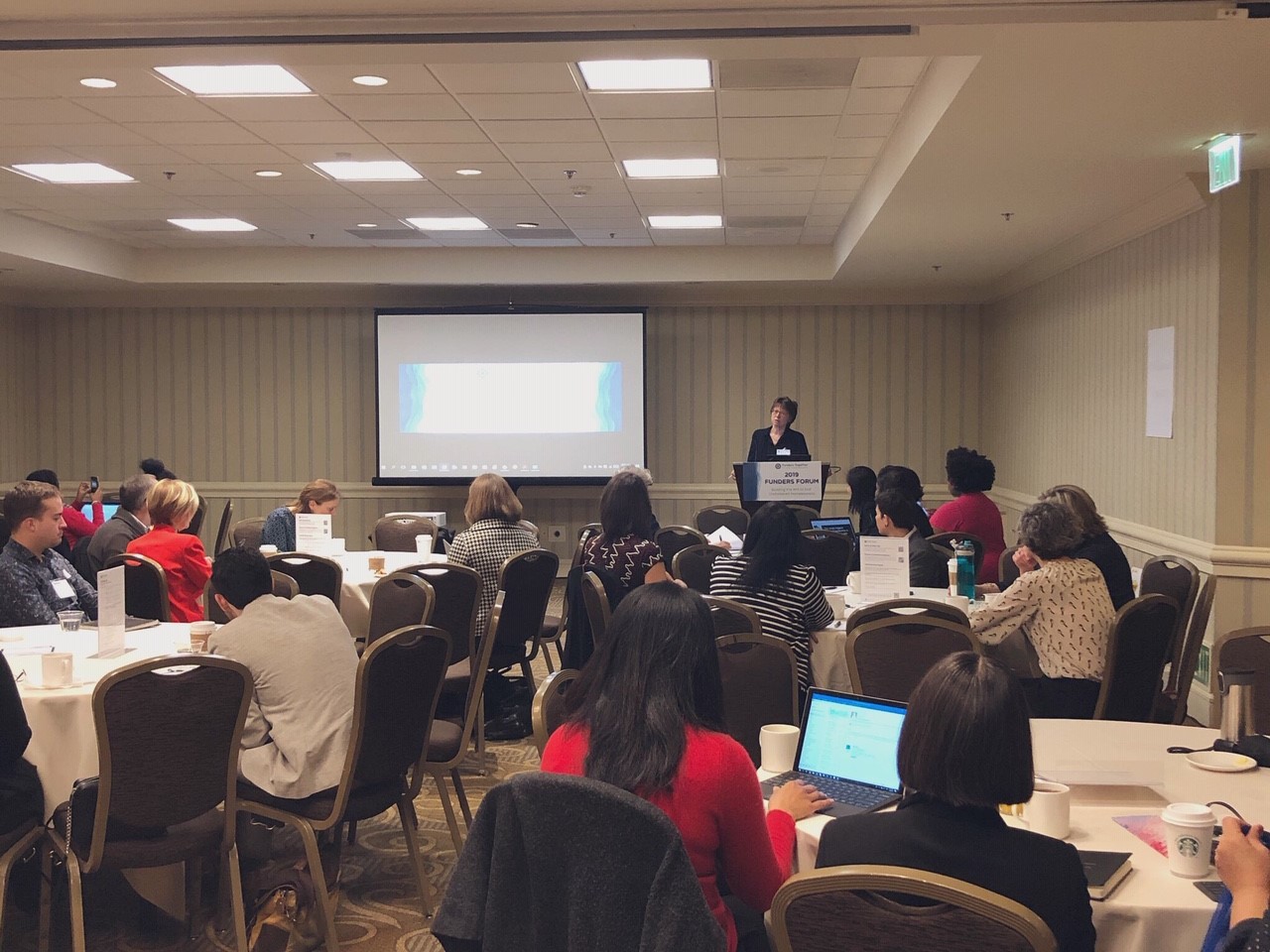 Regardless of the topic, whenever I leave the flurry of work and family life for three days to attend a funder network meeting, I can’t help but find myself wondering “Will it be worth it?” It was much easier to embrace this risk after learning that the 2019 Funders Forum would be held in San Diego at a time of year when my home town, Omaha, Nebraska, has endured a particularly brutal winter including more than 50 inches of snow and -20-degree temperatures.

For information and resources on unsheltered homelessness, visit our Unsheltered Homelessness Resource page.

Read more about the 2019 Funders Forum in the convening recap by Kristin Williams of the Sherwood Foundation. 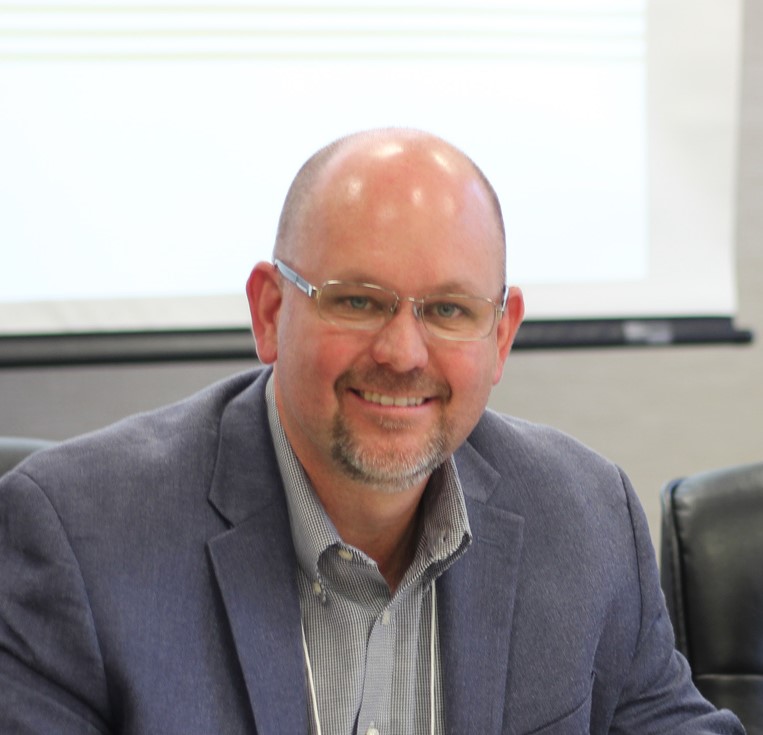 2018 Funders Institute: Reflections From The Day 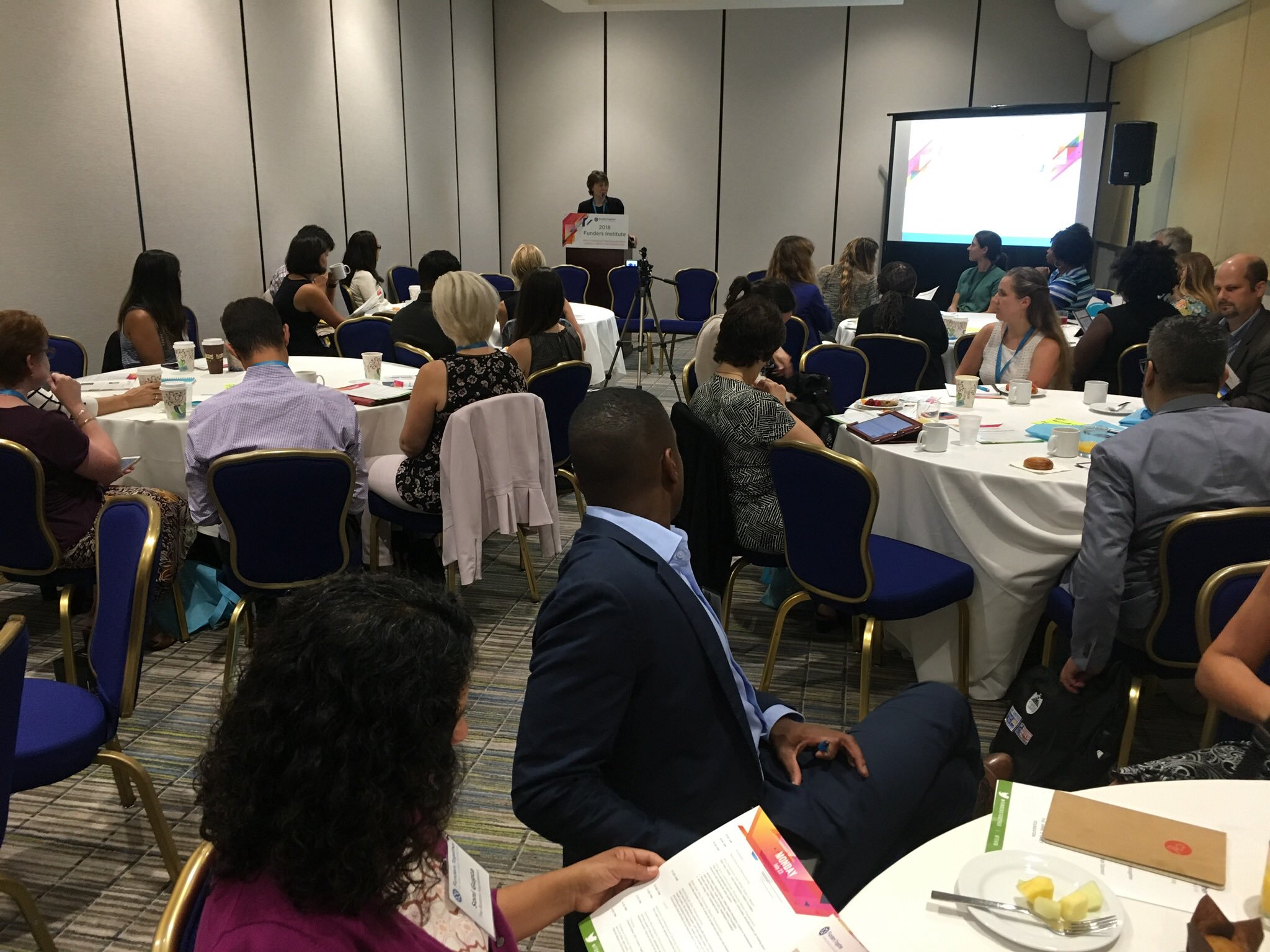 In July at the 2018 Funders Institute, attendees gathered to share what they are learning about homelessness prevention, including what it is and how to work effectively with other systems to really end homelessness. The highly interactive day included a panel discussion, speed networking on what we’re each learning in our work, roundtable discussions, and opportunity to connect with multiple national leaders.