Emergency Briefing on Adding Citizenship Question to the 2020 Census


To join via web: https://baumanfoundation.adobeconnect.com/homeroom

Please note: You do not need to register to join this briefing. Please use the information above to log-in a few minutes before the start of the briefing.

On March 26, at around 9 pm, Commerce Secretary Wilbur Ross announced his decision to add a citizenship question to the 2020 decennial census, in response to a request from the Department of Justice.  The Secretary noted that he received more than 50 letters on the subject and he interviewed more than two dozen people. That included a letter from roughly 120 foundations opposing the addition of the citizenship question.

In his memo, Secretary Ross concluded that asking the question will help the government gather currently unavailable data on the population of people who are actually eligible to vote, thereby helping to enforce the Voting Rights Act.  He added, “The Department of Commerce is not able to determine definitively how inclusion of a citizenship question on the decennial census will impact responsiveness. However, even if there is some impact on responses, the value of more complete and accurate data derived from surveying the entire population outweighs such concerns.”

The Secretary decided to use a question that is currently asked on the American Community Survey (the equivalent of the census long form).  Here is that question: 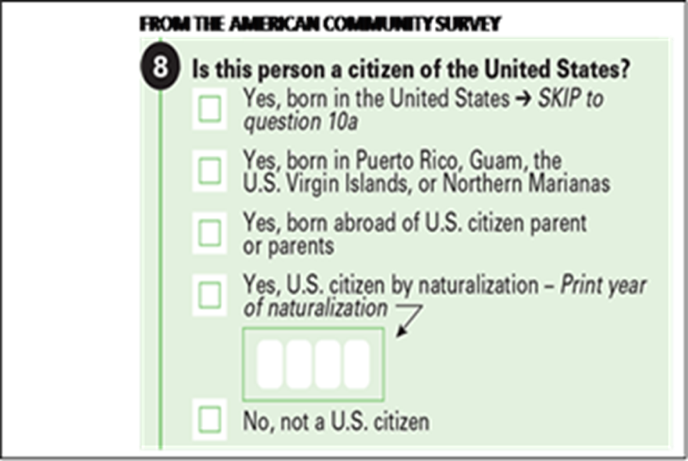 To understand what happened and the implications of adding the question, and to begin a discussion about how to respond to the new question, there will be an emergency briefing broadcast via the web for funders.