In June, I attended the Point Source Youth Symposium on Solutions to End Youth Homelessness in New York City. There were many conversations that resonated and increased my knowledge in the field, but there were three major take-aways that struck me as actions that funders should consider in their workplaces, grantmaking, and advocacy work.

1. It only took five minutes but it made an impact.

When I checked in at registration, I was given the option to select a gender pronoun pin to attach to my nametag. Fashioning my “Please use she/her pronouns” pin onto my lanyard, I made my way to the opening plenary where Point Source Youth staff began with a series of acknowledgements and warnings. They not only recognized that New York University sits on Lenape land, but also acknowledged that their native land was violently stolen from them. This was followed by warning the audience that the presentations contained GIFs and videos that may trigger folks with photosensitivity. Finally, they acknowledged that the subject matter of the plenaries would be difficult and that audience members should prioritize caring for themselves and take breaks if needed. While this took place quickly in a matter of minutes, this series of events set the tone of inclusiveness at the conference.

Asking for pronouns in meetings is one way to make LGBTQ participants feel safe and included. At times, it’s hard to find a way to express pronouns since in most sessions participants just listen and aren’t often asked to introduce themselves and state their gender pronouns. The pins that Point Source Youth offered were easy to spot and were a great way to keep LGBTQ equity front and center. 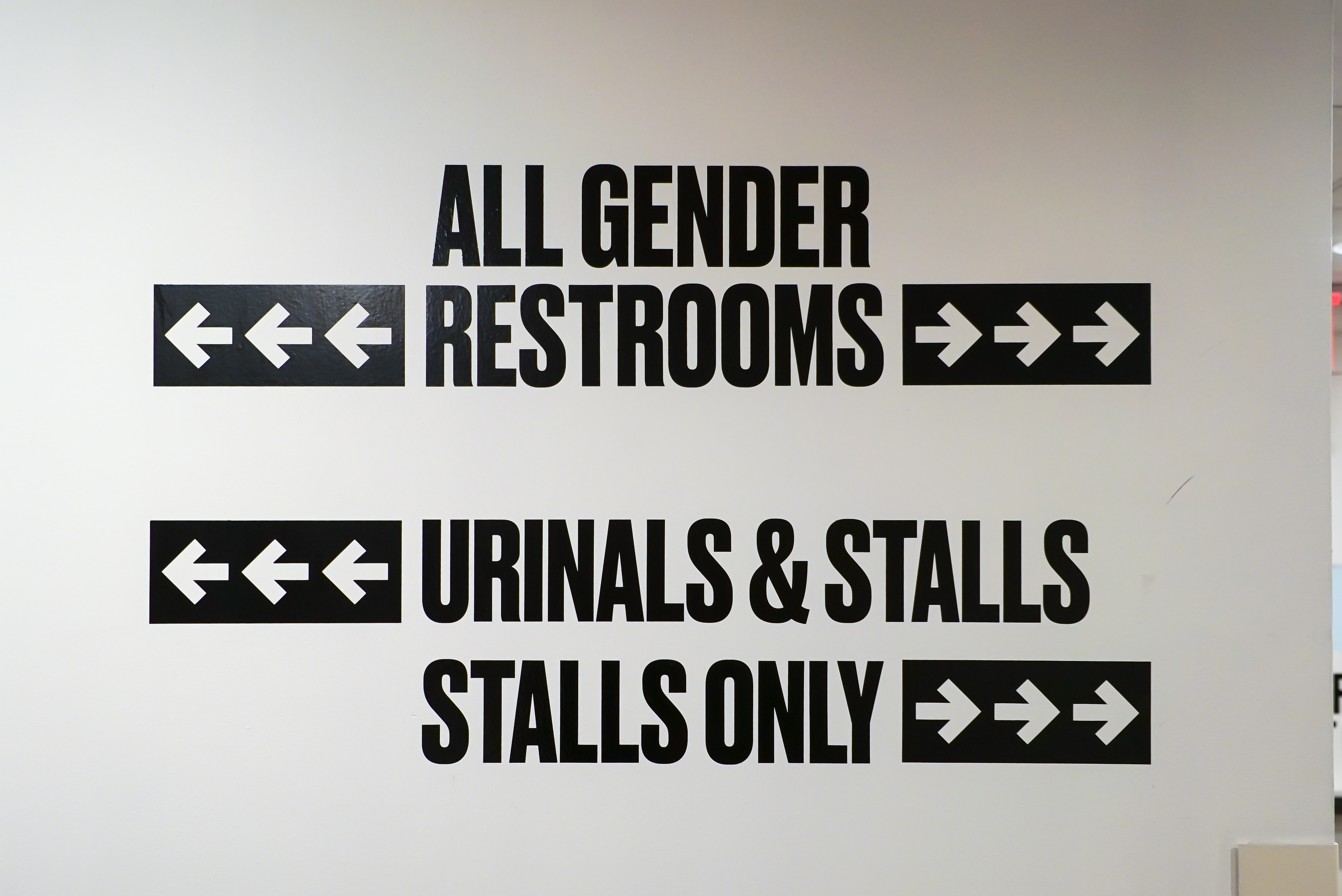 If we are committed to racial equity, native land recognition is an important practice of that commitment. What’s more, this practice becomes more impactful when we are honest about the violent history of colonialism and the forcible removal of native people from their lands. To state this directly is a small step in ending a violent history in which Indigenous people are erased, ignored, and oppressed.

Conferences have long been exclusionary for many people, but especially for people living with disabilities. Inaccessible meeting spaces, decorations in walking spaces, speakers who don’t use microphones, and GIF/video use can make conferences not only inaccessible, but also unsafe for many people. To provide a warning for people with photosensitivity was a small step in the direction of making a conference more accessible to people living with disabilities.

The subject matter of homelessness conferences often covers subjects that may be triggering to people with lived experience, while also covering intersecting issues that may be challenging or triggering to people with different types of lived experiences. It’s important to both acknowledge how difficult the subject matter is, and to normalize prioritizing selfcare and mental wellbeing and safety.

After hearing Cecilia Gentili, Yves B. Golden, Andrea Jenkins, and Dominque Jackson discuss youth homelessness and trans rights in Tuesday’s morning plenary, I decided to change my afternoon session plans so I could attend the Organizing and Leadership: The Movement for Transgender Rights session because the speakers shared a horrific statistic with us: The average life expectancy of a black trans woman is 35 years old. In a field saturated with data and statistics, sometimes when I hear numbers, they don’t land. But this shook me. In tandem with knowing that 10 transgender women have lost their lives in 2019, this statistic made it clear that during this Symposium, it was vital that I listen and learn from the trans speakers at the conference. 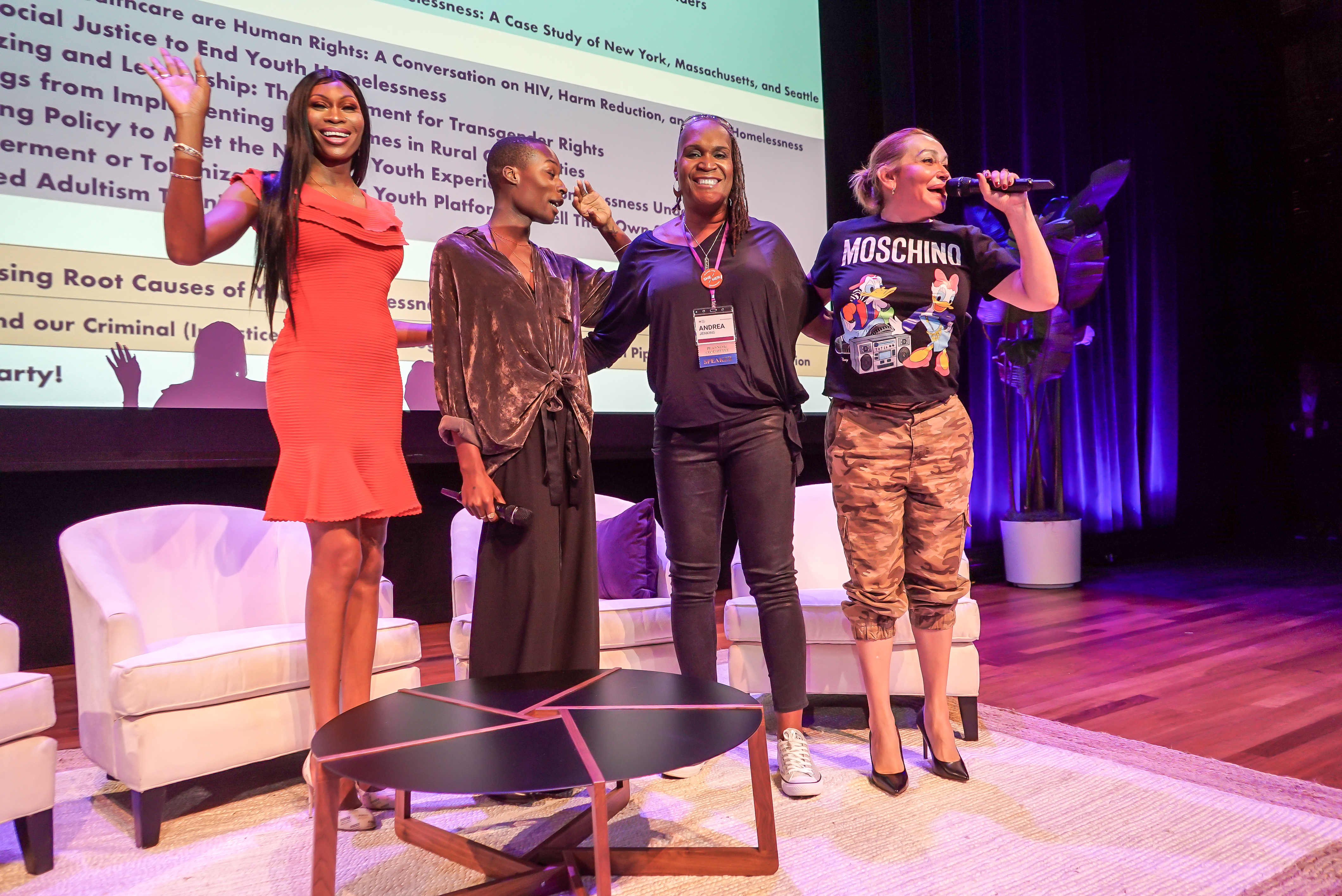 When the session on The Movement for Transgender Rights began, audience members were greeted with a poem by Minneapolis City Council Member, Andrea Jenkins. Discussion about what organizing styles looked like for the panelists in their work toward transgender rights. Yves B. Golden shared their writing and theoretical work about news coverage, fashion and reporting related to transgender people. Their work was powerful but I wondered why it was being included in this conference about youth homelessness.

I listened to Cecilia Gentili tell a story that at first seemed also unrelated to the panel topic and to the conference. She told us a story about a man who wanted her to tell her story as a transwoman for a project he was working on. She began to tell him a story about having sex in a bathroom. He recoiled. The listeners of his project wouldn’t want to hear such a story. What he meant was – what he wanted to hear, and what his listeners wanted to hear, was a story of trans pain and trans misery.

Cecilia went on to tell the audience her story about having sex in a bathroom, which was funny and tender and highlighted the fetishization that transwomen frequently face. The story was full and multi-faceted. And then it clicked as the story highlighted something vital that funders need to hold close: When we invite people with lived experience to our tables, when we invite people of color and LGBTQ people to our tables, we need to be prepared to listen to the stories they want to tell us, rather than the stories we expect to hear. We need to create space for stories of joy and humor, not just stories of pain. We need to create space for fullness and not just the painful experiences that we may feel folks need to hear to change narratives.

3. Funders should not shy away from advocacy work

During Wednesday’s plenary, Cecilia Gentili, Jessica Raven, and Kierfer Paterson had a conversation about economic justice, survival sex, and sex work. Their conversation was the most nuanced conversation on this subject matter that I’ve heard at a homelessness conference yet.

We also need to be thoughtful and intentional in this work. The speakers discussed the way adultism shows up in stereotypes about sex work and in the services we create for sex workers. While there are sex workers who enter into it through coercion, circumstance, and due to lack of other viable financial options, there are also those who make a choice to earn money through sex work. When we assume that everyone is forced into sex work, we remove agency and power from sex workers. Similarly, when we create services for youth sex workers and label them as “developmentally appropriate”, we enact adultism. Developmentally appropriate is another means of removing agency and power from youth who have likely experienced more adult events than many of us.

Along with this, the speakers discussed the ways in which the movement to stop human trafficking, while well-meaning, often isn’t nuanced enough. There have been several accounts of interracial couples being reported as incidents of human trafficking. White discomfort frequently causes white people to transform situations that make them uncomfortable into something nefarious – it allows them to not have to deal with their discomfort. Sex trafficking campaigns can work to spread clearer information about what signs to look for so that incidents like this don’t target people of color.

Lauren Samblanet is responsible for Membership and Program Coordination for Funders Together. She has a Master of Fine Arts in Poetry from Temple University and a Bachelors in Creative Writing from University of Colorado. She is a poet and hybrid writer who cross-pollinates with other forms of making & other makers of forms.