Below are the Search Results for 'Veterans' Resources: 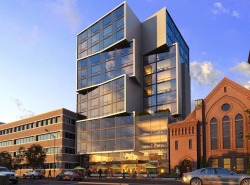 Private foundations have generally played a small role in helping to end veteran homelessness. Yet even small private investments can have tremendous impact.

Reflections on Gratitude from the National Coalition for Homeless Veterans
Nov 22, 2017

The month of November is a unique time to reflect on the many things we at the National Coalition for Homeless Veterans (NCHV) have to be thankful for, including the military service of millions of veterans and active duty, guard and reserve servicemembers.

Homelessness: The Symptom of a Much Larger Challenge
Jun 28, 2016 On June 23rd, FTEH Board Member David Wertheimer spoke in Orlando, FL, at The Road Home Breakfast gathering of the Central Florida Commission on Homelessness.  Still reeling from the shock of the deadly attack against the LGBTQ community at the Pulse nightclub that took 49 young lives and wounded 53 others, the city’s officials nonetheless...

The Urgency of Veteran Homelessness
Aug 06, 2015

Veteran homelessness is on the decline and ending it can be accomplished, but private funding is needed to fill the gaps that currently exist in programs and services. Will philanthropy answer the call?

Webinar Archive: Homelessness and Aging
May 20, 2015

How can we better connect the systems serving older adults and people experiencing homelessness?

The Challenge of Serving Those Who Have Served
Feb 23, 2015 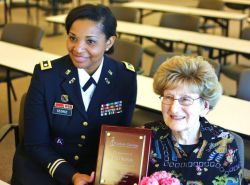 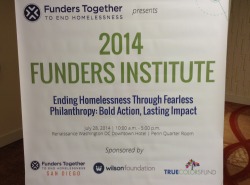 Through Funders Together, we have learned a great deal about the vast needs facing veterans in Houston. Much to our surprise, Houston has the second largest returning-veteran population and there is great need for private philanthropic support, coordination of services, and collaboration among local agencies.

By combining the power of public and private funding with the expertise of programs such as Pathways DC, we have provided a tangible, permanent solution to one of the greatest social shortcomings of our time.

With a scarf and a clipboard, I joined many government officials to conduct a census of people who were spending the night on the street in D.C. with low temperatures in the 30s.

We must view the issue of veteran homelessness as an ongoing, deeply rooted, and formidable challenge.

Over the last couple of months, an abundance of useful homelessness resources have become available. These are our recommended reads for funders.

Collaborative Funding: Putting Your Money Where Your Mouth Is
Mar 29, 2012

A group of funders in Los Angeles—both philanthropic and public― recently announced a single $42 million Request for Proposals for projects providing housing and supportive services for people identified as chronically homeless.

You Can Help to End Veterans Homelessness
Feb 16, 2012

Together, we can ensure all our veterans have a home to call their own.

Ruminations on Veterans Homelessness: How Philanthropy Can Help
Nov 09, 2011

Until very recently, homelessness among our veterans has been largely ignored.